Kamen Rider Den-O is an anomaly in the Kamen Rider dome, maybe even more so in the Heisei Era. It is the first and only series to be so popular to have multiple spin-offs (those Taro shorts included) and have movies that introduce new Riders. 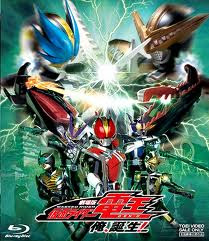 Kamen Rider Den-O The Movie: I'm Born!
Kamen Rider Den-O The Movie: I'm Born! was directed by Takao Nagaishi and written by Yasuko Kobayashi. This is the second Heisei era film in the Kamen Rider Series to be part of the storyline of its television series since Kamen Rider Agito. The film introduces Kamen Rider Gaoh who takes control of the DenLiner to bring it to the Edo period to find his own train, the GaohLiner, so he can take over all of time and space. The movie takes place between episodes 27 and 28 of the series. It also introduced Sieg and Den-O's Wing Form. It was a double bill with Juken Sentai Gekiranger: Nei-Nei! Hou-Hou! Hong Kong Decisive Battle, both of which premiered on August 4, 2007. 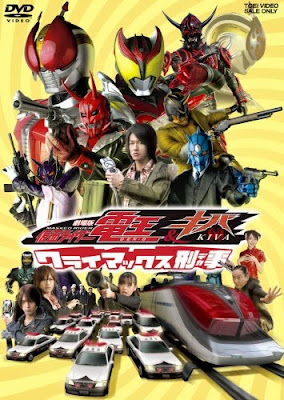 Kamen Rider Den-O & Kiva The Movie: Climax Deka
Kamen Rider Den-O & Kiva The Movie: Climax Deka debuted in theaters on April 12, 2008 during the run of Kamen Rider Kiva. It features a meeting between the characters of Den-O and the characters of Kamen Rider Kiva. The animated short Momotaros's Let's Go Kiva! was shown as double feature. Climax Deka grossed 730 million yen ( over double the normal revenue for a Kamen Rider film) in box office and DVD sales. This premiered before the Kiva movie. In its first weekend, it took the top spot at the Japanese box offices, unseating the Japanese release of Cloverfield. The movie teams up Den-O and Kiva and introduces Negative Den-O.

Saraba Kamen Rider Den-O The Movie: Final Countdown
A third film (first time a Kamen Rider series has a third movie) was made called Saraba Kamen Rider Den-O The Movie: Final Countdown was released in Japanese theaters on October 4, 2008. The film features characters such as Kamen Rider New Den-O, Kamen Rider Yuuki, the Imagin Teddy, and the Ghost Imagin, the Phantom Imagin, and the Shadow Imagin. The animated short Imagin Anime: Be Forever Momotaros -Imagin Terminal Station-/The Movie was shown as double feature. The film was originally intended to be the end of Den-O, until the development of the Cho-Den-O Series. 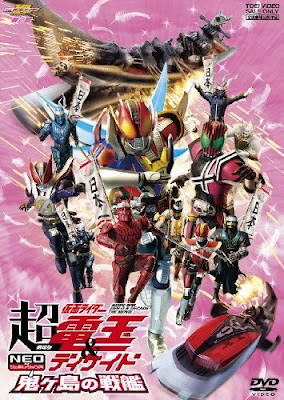 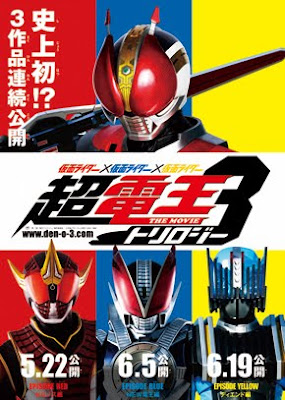 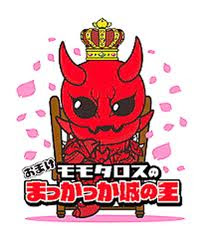 Momotaros's King of the Burning Red Castle
As a tie in with Kamen Rider Kiva: King of the Castle in the Demon World, the Tarōs starred in a series of 4 short episodes called Momotaros's King of the Burning Red Castle, where they get into another crazy adventure as they take the Go-Onger's Ginjiro out for a spin. The 1st 3 episodes are one-minute-long, airing from July 20 to Aug 3 after the Go-Onger and Kiva movies, the Taros in reviewed the movies before Ryutaros is kidnapped by Kamen Rider Rey. The 4th two-minute-long episode showed in theaters after the Kiva and Go-Onger movie double billing, with Ryutaros found by Momotaros as reenactments of the two movies by the Taros are played on the movie screen. There was a "Burning Red Ver." and a "Yellow Ver." of the short film, shown at specific theaters based on the announcement that Saraba Kamen Rider Den-O: Final Countdown would be playing at that theater.
Posted by Lavender Ranger at 9:44 AM

I have that Den-O and Decade poster.