I had this idea before, that I was going to do in N0n-PR/SS Week but either I forgot or was going to do for this week. Anyhoo, when Metal Heroes (which was used to be adapted in VR Troopers and Big Bad Beetleborgs) ended in 1998, the Kamen Rider Series itself has adopted many of the Metal Hero Series' traits in the Heisei Era (Kamen Rider Kuuga started this in 2000). Let's look at some of these.

Armor
Kamen Rider X looked armor like, but the Kamen Riders didn't start to adapt large armors until the Heisei Era. Above is the most armor-y looking ones, being the Kamen Riders in Kamen Rider Kabuto. The power-ups for the main Kamen Riders were heavy armor and so were the series of Blade, Kabuto, Den-O, Kiva, Decade and Double (I mean the regular Kamen Riders). Fellow blogger Sean Akizuki equates the Power Ranger Battlizers with the Super Blue Beet in B-Fighters. So in a way, B-Fighter and the other Metal Heroes inspired Kamen Rider. Microforever says: "Masked Rider Blade series design was more like the old Metal Hero, with heavily armored Riders along with heavy motif of playing cards designs." 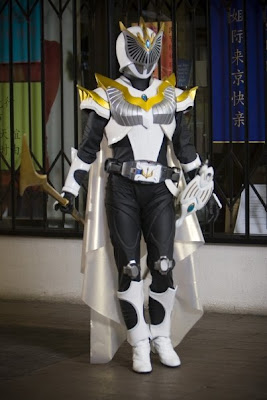 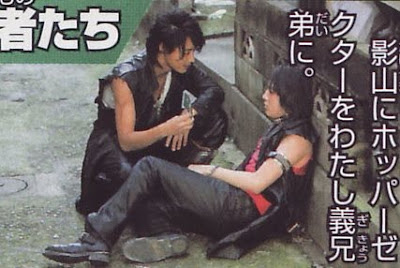 More Serious and Complicated
Kamen Rider was serious enough, but there were so goofy moments like in Super-1 when the Jin Dogma came along. It pretty much remained serious in the Heisei era, sure there was some comic relief and kid-like characters and blue-collared humor, but the Kamen Rider series is arguably much serious than Super Sentai. And I heard Skyrider was made because Amazon and Stronger were considered too complicated in plot. But pretty much every Heisei series is complicated and that is much like Metal Heroes. Well, Metal Heroes did get less serious and more juvenile afterward with B-Robo Kabutack and on. But I think Kamen Rider has kept the tradition of the more serious one.