Motorcycles are very essential to Kamen Rider, even thoug they are not as focused on in Heisei Era as they were in the Showa Era, cycles are still part of the DNA of the Kamen Riders. I am only covering the motorcycles.

Tornader
The Machine Tornader is Agito's motorcycle that can transform into a hovercraft for him to surf on.

Guard Chaser
G3's motorcycle which stores his primary weapons, based upon the designs of Kuuga's TryGouram/Beat Gouram bikes.

Gills Raider
Gill's personal motorcycle which changes along with him under the power of the Meta Factor.

Dark Hopper
An alternate form of his Honda XR250 bike under the power of the Ank Point for Another Agito. 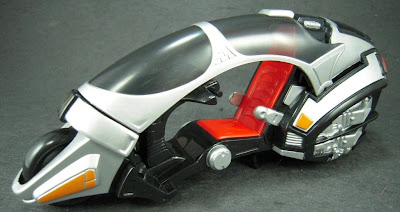 Rider Shooter
All the Riders in Ryuki used this to go to the Mirror World.

Dragranzer
A red mechanical dragon that Kamen Rider Ryuki has made a contract with and it becomes like this with the Survive Card. It can transform into a motorcycle.

Black Raider
A giant mechanical bat that Kamen Rider Knight has made a contract with and it becomes like this with the Survive Card. It can transform into a motorcycle. 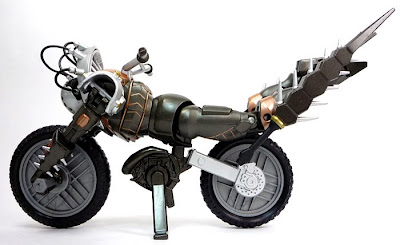 Auto Vajin / SB-555V
The Auto Vajin is Faiz's personal support mecha and it is designated 'SB-555V.' It transforms from a Smart Brain motorcycle.I t can drive by itself in this form and reverts to this form when it is significantly damaged.

Side Basshar / SB-913V
The SB-913V Side Basshar is Kaixa's support mecha, and can transform into either a sidecar-type motorcycle in Vehicle Mode or a bipedal battle Mech in Battle Mode.

Red Rhombus
The Red Rhombus is a motorbike developed by B.O.A.R.D. specifically designed to the aspects of Garren's Rider System.

Green Clover
The Green Clover is a bike of the Leangle Rider System. It has limited Rouzer capability. This feature allows the Rider to further augment certain aspects of the bike's performance levels. 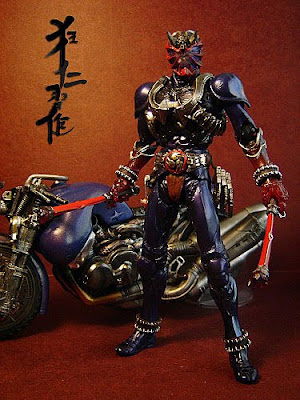 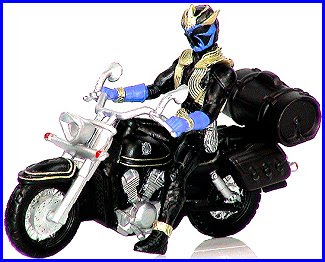 Machine Zectron
Machine Zectron standard-issue bikes for each Rider; mass produced by ZECT. Zectron Pinch is the standard weapon equipped to the bike. 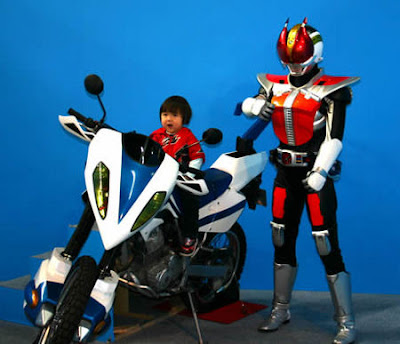 Machine DenBird
Den-O's personal Honda XR250 bike that is able to launch from the DenLiner. Although Ryotaro never uses it as a mean of transportation, the Taros would sometimes use it while possessing his body. 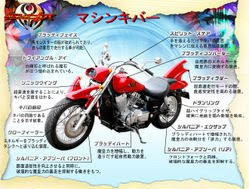 Machine Kivaa
The Machine Kivaa is Kiva's personal Honda Shadow 750 motorcycle given by Kivat and is said to have been made by Motobat the 16th, master craftsman of the Kivat Race. The Kivaa is a living motorcycle, possessing the brain of a horse monster in its upper cowl. When running at high speed, it generates the Shadow Veil to hide itself from plain sight. The Kivaa can be powered up through the use of the Buroon Fuestle. 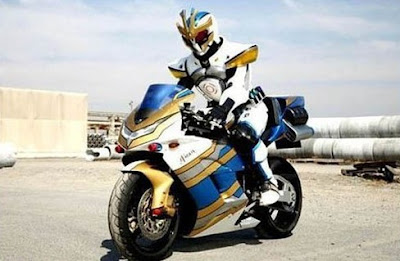 Ixalion
The Ixalion is Ixa's personal Honda CBR1000RR motorcycle, a MotoGP style bike, dubbed as the "Stallion" to his White Knight motif. 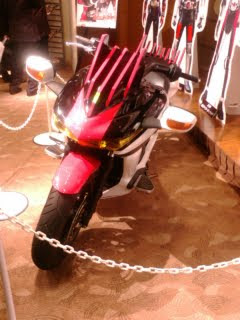 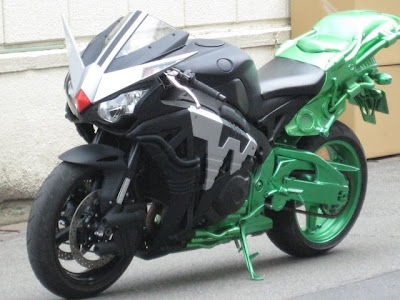 HardBoilder
The HardBoilder, designated the "MB1000RV", is Double's Honda CBR1000RR motorcycle. It is able to change forms by swapping out the back half of the motorcycle after docking with the RevolGarry. 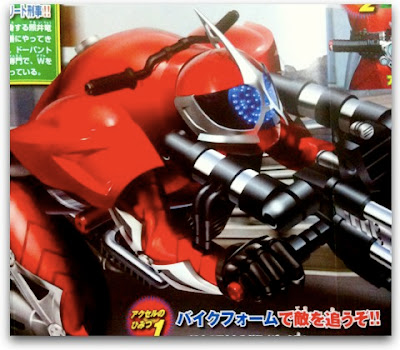 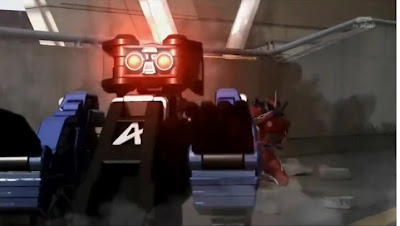 Gunner A
Itis a robotic tank that serves as Kamen Rider Accel's support droid. Its AI allows it to operate on its own from Accel. The front unit can also combine with the Gunner A to become the HardGunner. 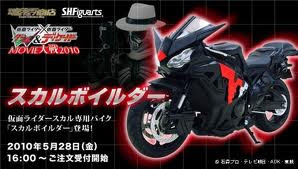 SkullBoilder
It is Kamen Rider Skull's personal motorcycle. It is a modified Honda CBR1000RR resembling Kamen Rider Double's HardBoilder, but all black in color. It is armed with a series of guns called the Universal Launchers. 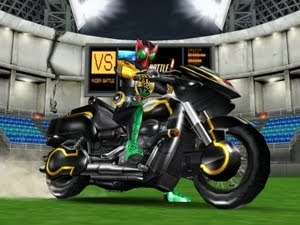 Ride Vendor
The Ride Vendor is Kamen Rider OOO's modified Honda VT 750 C2B Shadow Black Spirit mass-produced by the Kougami Foundation. It can transform from its Machine Vendor Mode, wa vending machine which holds the Candroids, allowing it to stay hidden in plain sight as a vending machine until needed.
Posted by Lavender Ranger at 9:28 PM

Motorcycles are sexy. Especially Accel since he's a hot guy AND a motorcycle.