In an effort to do posts that people do not expect, I decided to highlight a slightly forgotten yet crucial character in the Power Ranger legacy. The anomaly known as Hayley. 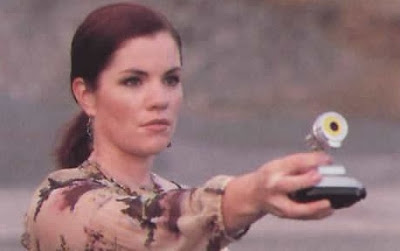 Hayley was introduced in Power Rangers Dino Thunder, as the owner of the Cyber Cafe, in homage of the Juice Bar in the first season and also Tommy's technical adviser. She was played by Ismay Johnston, who is three years younger than Jason David Frank and eight years older than the actors who portrayed Ethan, Devon and Kira. She played a TV Announcer in the episode "Good Will Hunter" of Ninja Storm. Hayley's connection to Tommy was that they met in college and seeing her knowledge of technology, he conveyed to her that he was once a Power Ranger. She didn't even get a last name. She was also the boss of Kira, Ethan and Trent for some time. On the show, she built the Hovercraft Cycle, helped Tommy get out of his suit and become visible and created the Triceramax Mobile Command Center and other technological help.

She showed the new Rangers a video of the history of Power Rangers, so one is to believe Tommy showed her this, but it is still strange he trusted her with his secret but he didn't go to Billy instead. But of course, Billy probably wasn't asked back because it would have probably cost more. Getting Jason David Frank was a financial feat unto itself. And if they couldn't get him back, they did plan to have another character in his place--Edward Payne. So maybe Hayley would had been connected to that character in a similar way. Some fans thought Hayley was brought as a romantic interest but she and Tommy remained strictly platonic. She didn't return from the reunion episodes in SPD.

UPDATED 10/9/10 11PM EST
agent-chliever brought up that Hayley's last name was Ziktor, it wasn't mentioned on the show. I researched it and it is all over the Wikipedia-like sites. It is said that producer Doug Sloan confirmed it and that it was in the casting call. Ziktor is the last name of the alias of Grimlord (Karl Ziktor) in VR Troopers. Someone says that in an episode she told Ehtan that she used to work for big business, maybe she was his daughter. And if not, maybe it was just a wink wink reference and nothing more.

Posted by Lavender Ranger at 3:21 PM

I can't recall where I heard this, but apparently Hayley's last name was confirmed as, of all things, ZIKTOR.

Inside joke or something more? I doubt we'll ever know.

Okay, I checked it out on Wikipedia, some one says Doug Sloan said he did it and that it was in the casting call. Ziktor is the last name of Grimlord's alias. Someone says that in an episode she told Ehtan that she used to work for big business, maybe she was his daughter. And if not, maybe it was just a wink wink reference.

Did you do this for me?