Diane Lady and Helen Lady
As I mention before, Diane Lady was Speilban's sidekick, she was also his romantic interest. Footage of him and her became J.B. and Kaitlin in Saban's VR Troopers. Helen was Spielban's sister but was hypnotized to be Hellvira (whose footage was used for Red Python in VR Troopers) and was reformed and became Helen Lady, who became Kaitlin's twin mode in VR Troopers and was not a seperate entity. They wore red/white/silver armor. 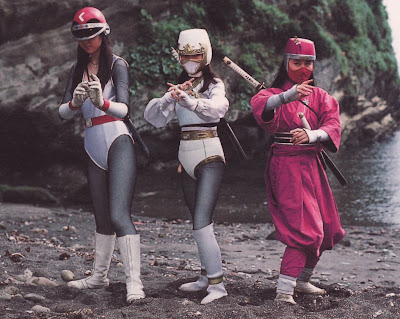 Princess Ninja Emiha, Reiha and Hananin Yumeha
Oops! I forgot about Jiraiya! That happens a lot. Kei Yamaji dresses as Emiha to assist Jiraiya, she wears a white ninja armor similar to her adoptive brother's. There was also the pair of the International Secret Police. Rei Yagyu became Valorous Ninja Reiha, she was a mysterious kunoichi entrusted to protect Toha. She holds a secret power which she releases when her pupils glow green. Like Toha, she is descended from the alien that brought Pako to Earth, thus she is the only person whose blood type is compatible with Toha's. Hananin Yumeha is A female ninja apprentice from the Flower Ninja Clan, a clan from Lake Hamana which branched off from the Togakure school.

SolJeanne
Three years later from 1988 to 1991, there was no female warrior in Metal Hero until SolJeanne in Tokkyuu Shirei Solbrain. Reiko wore red armor, black/white flamebable suit and helmet without mouthplate (she can wear also the oxygen mask). Her primary vehicle is SolDrecker, which also carries Dozer. She and Daiki are only humans on the team. Using her SolDrecker, her transformation call is "Plus Up". She falls in love with Daiki, the protagnist.

Reddle
Rei Hayama was the first Reddle in Juukou B-Fighter. Her armor was modeled after a Japanese rhinoceros beetle in red. She eventually left for the South American branch of Earth Academia to do research and help with protecting the wildlife there after 22 episodes. Rei's successor Mai, a young and cheerful 19-year old student who was "chosen" by Rei's B-Commander as the next Reddle. Actress Reina Hazuki had to leave the show due to a neck injury. A similar change in actresses happened in Big Bad Beetleborgs as Jo was played by two different girls, it was explained with magic that her appearance changed but magic also made it so everyone except the Beetleborgs would see her old face. 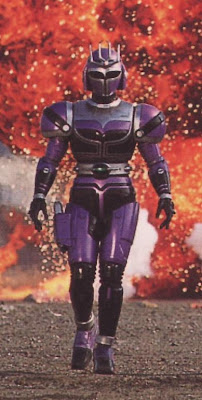 B-Fighter Tentou
Ran Ayukawa is an 18 year-old computer expert who had feelings for Julio and her purple armor is modeled after a ladybug. She thought more on the technical side. Jo gained the purple armor in Beetleborg Metallix. Since they were separate characters in Japan, the six B-Fighters met together at different times.

B-Fighter Ageha
Sophie Villeneuve is a French seventeen-year old genius violinist who is in love with Kouhei,. As B-Fighter Ageha of the B-Fighter Kabuto series, the Warrior of Flowers, has white and black armor modeled after a butterfly. She became Ladyborg, one of the four Astral Borgs in Beetleborgs Metalix. Her suit was reused for Tezzla in "Forever Red" episode of Power Rangers Wild Force voiced by Catherine Sutherland, who portrayed Kat the Pink Ranger.

Tentorina
In B-Robo Kautack (which is part of the Metal hero legacy but not considered by fans as part of it since it is directed towards smaller children), a ladybug-type robot with a ladybug-type biochip. She consumes energy highly and does not have combat ability. Tent means ladybug in Japanese.

Didn't the the show with robotic dog also have a female rabbit robot?
Funny how the Female Robots in those two shows are permanently in humanoid form, yet useless...