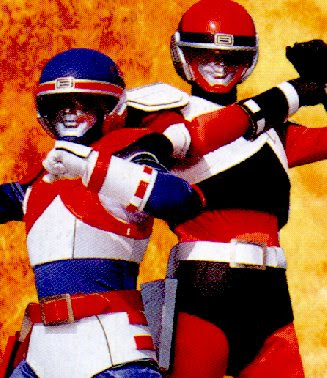 Kyoudai Ken Byclosser (Brother Fist Byclosser/兄弟拳バイクロッサー) is a series created by Shotaro Ishinomori (Ishinomori Productions) and Toei Company. Series consisting of 38 episodes airing on Nippon Television from January 10 1985 until the date of 26 September the same year. 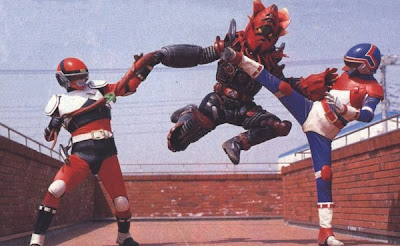 The one in red was Byclosser Ken / Ken Mizuno and the one in blue is his younger brother Gin / Ginjiro Mizuno. Tetsu Kaneko played Ken and Yuki Tsuchiya played Ginjiro. Apparently they are available on DVD, came out in 2007-2008. Also the first episode was available in 2008's 70th Anniversary of the Birth of Shotaro Ishinomori. 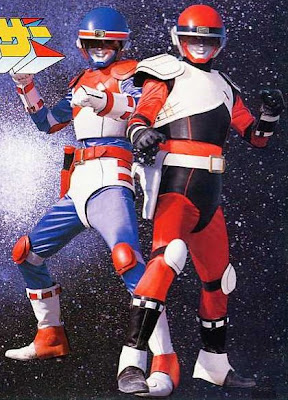 It was dubbed in Portuguese for Brazil, by one of TV Rede Globo in the year 1991 , and later broadcast by the TV Gazeta. Unfortunately the results of dubbing was very bad, a lot of translation errors and inappropriate names. 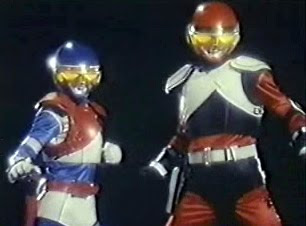 I don't have pictures of the villains but they were called Dester and lead by Doctor Q. I got this info from the Japanese wiki, not available in the American wiki. 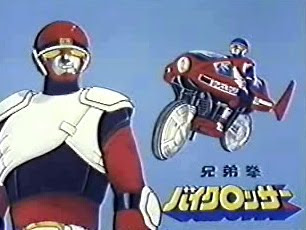 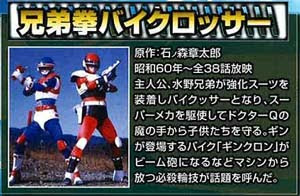 Posted by Lavender Ranger at 10:14 AM