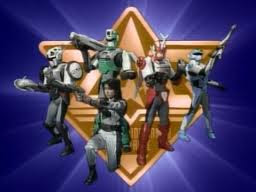 Dennou Keisatsu Cybercop (Electro-Brain Police Cybercops) was first created in 1988 by Toho Enterprises, the show was an attempt to create a Tokusatsu series using the Super Sentai motif, but the idea was dropped after the unaired episode zero. The show was broadcast in NTV between mid-1988 and 1989. Due to financial problems, Tomoko's armor, Venus Bit, was never built. Many fans believe this show to be a stepping stone to the Chouseishin Series (Gransezar). A sequel was made to this series but animated, it was canceled due to poor ratings, ending in37 episodes, it was called Armored Police Metal Jack. 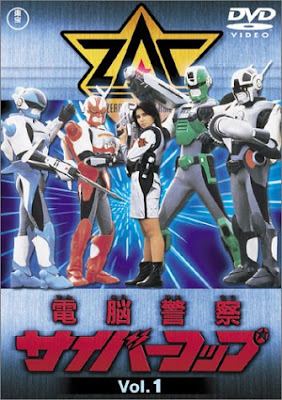 In the year 1999 (which at the time was 11 years later), crime has overrun Tokyo city, Japan. Hopelessly outmanned, the Tokyo Metropolitan Police Force decides to setup a special taskforce codenamed “ZAC” (Zero-Section Armed Constable), designed for special missions. The heroes wore "Bit Suits", three high-powered armors: Mars, Saturn and Mercury. In the first episode, a mysterious young man, Shinya Takeda, appears from nowhere and saves the day after using his own armor, the Jupiter Bit Suit. Following his victory, he joins ZAC, which starts to battle the evil organization Death Trap, ruled by Baron Kageyama, which manages to use the computers' will-power to gain world domination. 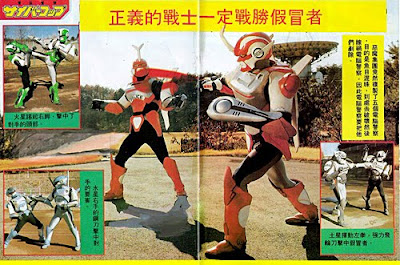 Shinya Takeda/Jupiter
Found by the Interpol rescue team, Takeda had a secret past he couldn't remember. He was fun-loving, but had a tempers. Jupiter is able to summon his own Cyber Thunder Arm, through a process called Cyber Boming, which ultimately kills his nemesis. The Jupiter Bit is the most advanced bit in ZAC arsenal and is far more powerful than any of the other Bit Suits. Later, it is revealed that Takeda was brought in to the year 1999 by a time-space portal fend, which opened after the Babylon Tower's explosion in the 23rd century, along with Lucifer and Kageyama. For Sailor Moon, Jupiter was green. 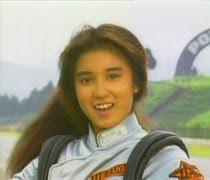 Tomoko Uesugi
Backup ZAC officer for the Cybercop. Monitors and assists with the maintenance of Cybernation and Black Chamber systems. Falls in love with Takeda. Carries the standard ZAC firearm, the S.D. Gun. I don't know how to feel about her not having amror, if it is a bad thing that she has no armor because she is female or that she is strong enough to fight without armor. In an manga version afterwards, her Venus bit armor did appear. 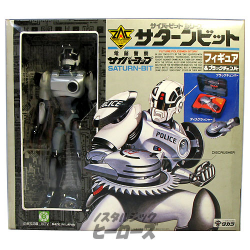 Ryoichi Mouri/Saturn
Jokester, does not enjoy fighting, eventually doing it because of his duties. His armor is equipped with numerous sensory and communication equipment which help aid the team in tracking down enemies and collecting data. His helmet antenna and his shoulder parabola sonar units can perform a wide range of surveillance, reconnaissance and tracking duties, making it the most vulnerable Bit Suit. For Sailor Moon, Saturn was purple. 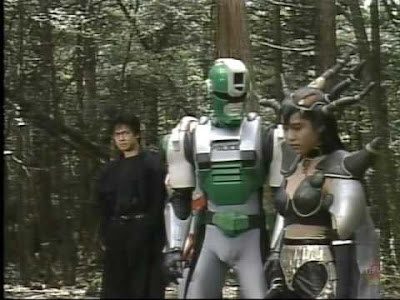 Akira Houjyo/Mars
The team leader, Akira's father committed suicide when he was 8 years old, making him to become rebellious and to use his intelligence to hack the system of the enterprise in which his father worked in, eventually bankrupting it. After that, he was practically raised by Captain Oda. His armor is designed specifically to provide heavy artillery and firearms support. Due to the size of his suit, is one of the slower units and hampers Hojyo’s movements a bit. His armor is outfitted with “Stabilize Gear”, which brace his armor when he uses his heavy guns. It is funny how Mars is usually red, but here it is green. 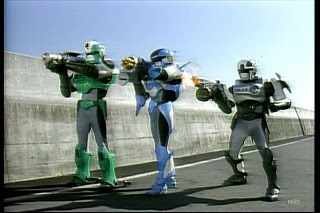 Osamu Saiyonji/Mercury
Sayionji’s is the resident hand-to-hand combat specialist. Osamu is very brave and has a great fighting spirit. His armor is the most lightweight of the armors and affords him extreme flexibility in movement and speed albeit at the cost of defense and protection. His unit is the fastest of the “Cyber Bit” armors and he can travel at incredible speeds . Mercury also has access to the “Linear Speeder” skates that can be controlled via brainwave controls in the Bit Suit helmet. It is funny how in Sailor Moon, Mercury is light blue too. 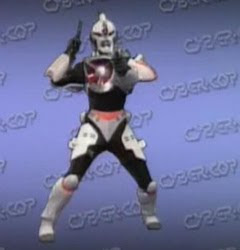 Lucifer
Takeda's ex-partner in the future, was also transported with him and Kageyama to the 20th century through the same time-space portal. At first, his only wish is to avenge his dead comrades, targeting Jupiter as his nemesis and challenging him to a death confront. He allies with Baron Kageyama believing Takeda was the traitor who murdered his companions. Eventually, it is revealed that Kageyama was the mole. From then, Lucifer decides to aid the Cybercops without joining the group, helping them in battle more often than not. Lucifer's bit, along with Jupiter's, is the most powerful of the Bit Suits, as it is more equipped and enhanced than the others. Armed with two high-power pistols called Impulse Magnum, two machine-guns which come from his back to shoulders, the Pulsar Cannon, Gigamax and the Cyber Graviton, an energy absorber-release on his chest.
Posted by Lavender Ranger at 12:24 AM

Now that I think about it, I remember the toys were imported here under the ZAP name. They were almost exactly the same as the originals but they just had name changes and interesting bios that made them out as robots.

do you think there is still a video or season for this series? I miss this show. Please reply if anyone know about this show and where can I download it with the english sub. THANK YOU SO MUCH

You can download all the 34 episodes from youtube, each one is divided in three separate parts (approx. 8 min long, each entire episode is approx. 24 min long), just type Cybercops, the name the show received here in Brazil.
Just one small detail: (un)fortunately it´s all dubbed in Portuguese

i found this on EBAY! I have never seen this before.