I realized after doing the grunts of the villains of the Metal Heroes, maybe not everyone know them all. There were two 'triologies' within the series, which were the Space Sherrifs (Gavan, Sharivan, and Shaider), the Rescue Heroes (Winspector, SolBrain and Exceedraft) and to some extent, the B-Fighters, which only lasted two 'seasons'. The Metal Hero Series' protagonists were primarily space police who were androids, cyborgs, or humans that transform into metallic armor. The shows were produced by Toei from 1982 through 1999 along with their other Tokusatsu superhero shows, such as Kamen Rider and Super Sentai. Currently, the Metal Hero Series are a defunct genre in place of Super Sentai and Kamen Rider Series of shows. The Kamen Rider Series itself has adopted many of the Metal Hero Series' traits. Today, the present versions of these types of heroes are merged in with the Henshin Heroes description. Some occasionally appear in stage shows and video games. 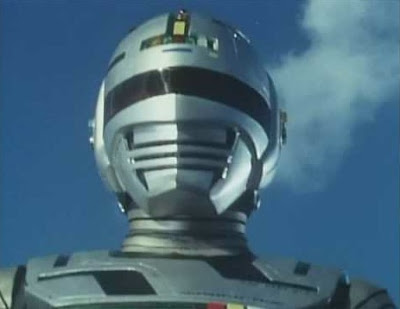 Space Sheriff Gavan (1982)
The first of the three Space Sheriff Series. Earth is invaded by the Makuu Empire, which first destroyed a space colony near Earth. It was being dominated because their leader Don Horror wanted to dominate the whole universe. Gavan from the Galactic Union Patrol, arrives as he was asked to defend the Earth, which is his mother's planet of origin. Gavan is helped by Mimi, the daughter of Commander Qom, and is given information by Qom, assisted by Marin on his home planet. 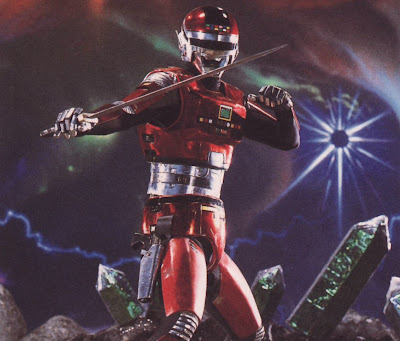 Space Sheriff Sharivan-1983
Den Iga, a forest patrolman, is attacked by a member of the space crime organization Makuu Empirei. Den is seriously injured in the attack. Gavan, who was visiting Mount Tsurugi in order to search for his father, assists Den, giving him medical treatment at Bird Planet. Chief Com of the Galactic Union Patrol is impressed by Den's courage and trains him to become Space Sheriff Sharivan. Gavan, who is able to ultimately bring down the Makuu Empire, is promoted to captain of the Galactic Union Patrol and takes charge of the whole solar system. Sharivan is appointed as the Space Sheriff of Earth. Later, he returns to protect the Earth with female sheriff Lily. 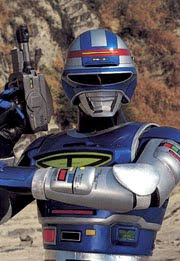 Space Sheriff Shaider-1984
In college studying archaeology, Dai Sawamura deciphered the figures on the Nazca Plain in Peru. Impressed by this feat, the Galactic Union Police recruited him and trained him to be Earth's third Space Sheriff, after which he was given the code name 'Shaider' in memory of an ancient warrior who defeated the villain Emperor Kubilai and brought down the Fuuma Empire 12,000 years ago. When the Fuuma returns, Dai is deputized as he returns to Earth to battle the Fuuma. He was the last of the three Space Sheriff. Footage of show (Hero, Monsters, Grunts and Villains) was used for Season 2 of the VR Troopers. 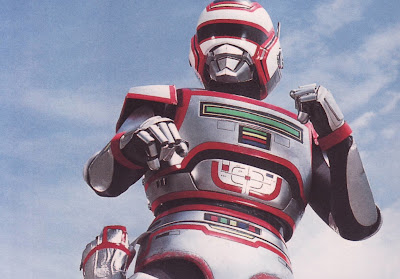 Giant Beast Investigator Juspion (1985)
The name Juspion is a portmanteau of the words "Justice" and "Champion". While reading the Galaxy Bible, Ejin learns of a shocking prophecy: When the dark god Satan Goss awakens, the universe will be ravaged by the giant monsters filled with rage. When Satan Goss appears, Juspion sets off under orders from his mentor Ejin to stop him and combat the corrupted Megabeasts with the giant warrior robot Daileon and his friends. 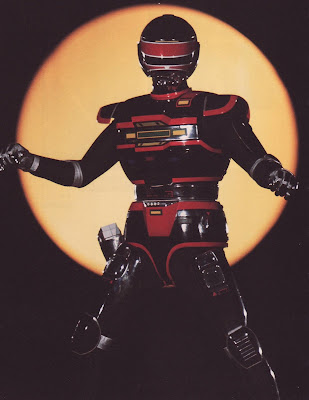 Dimensional Warrior Speilban-1986)
The Wahrer Empire destroys the planet Clin in search of water for its' deity. Two Clinian children, Spielban and Diana, escape to Earth aboard the Gran Nasca. Having grown up during the long journey, the two don High Tech Crystal Suits to defeat Wahrer, who have come to Earth in search of more water. Spielban must avenge his homeworld and find his missing father Ben and missing older sister Helen. Overtime, they learned that Clin was really Earth and that they were 10,000 years in the past. Footage of the show (Heroes, Grunts and Monsters, not Villains) was used for VR Troopers, both seasons. 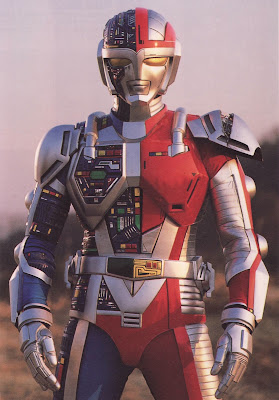 Super-human Machine Metalder-1987
Dr. Ryūichirō Kōga designed Metalder as a top-secret weapon for the Japanese Imperial Army for use in the Pacific War, modeling it after his late son, Second Sub-lieutenant Tatsuo Kōga. Dr. Kōga put Metalder to sleep in the Silver Carcass base. Dr. Kōga's former colleague Major Muraki, became the evil God Neros, ruler of Neros Empire. God Neros sends out his massive armies to kill Dr. Kōga and returned to Japan to activate Metalder in his human form Ryūsei. Kōga desperately tries to activate his android creation but the android is unable to understand what he should do. Kōga is killed and Ryūsei is beaten by Neros' troops and after that, he is fueled with rage, evoking the conversion to his 'true' form, the android known as Metalder. Footage (Hero, monsters, and main villain) of this show was used only for the first season od VR Troopers. The concept of the dog friend was used as well. 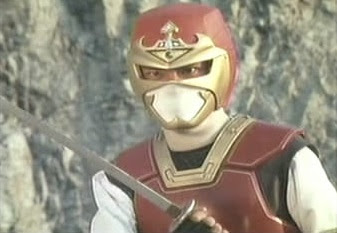 Sekai Ninja Sen Jiraiya Jiraiya-1988
The series centers around a young ninja master named Toha Yamaji, who must face against numerous ninja masters from different parts of the world by donning a special armor to become his alter-ego Jiraiya. The English title given by Toei's international sales department was Ninja Olympiad,a reference the Seoul Olympics that was held at the time the series was airing. 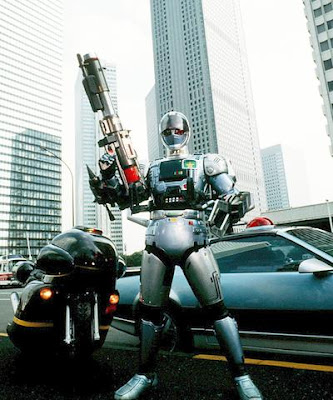 Mobile Detective Jiban (1989)
This was bascially a Japanese Robocop, as Robocop came out in 1987. Tamura, a new detective in Central City was killed by a Bioron and brought the man back to life as a robot detective, Jiban. 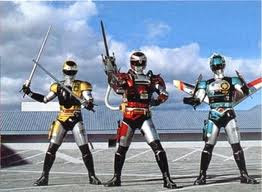 Special Rescue Police Winspector (1990)
The series follows the adventures and missions of a special "Rescue Police" team known as Special Police Winspector, as they stop crimes and respond to dangerous events where regular police force is not sufficient. The team is made up of one human and two robotic assistants. 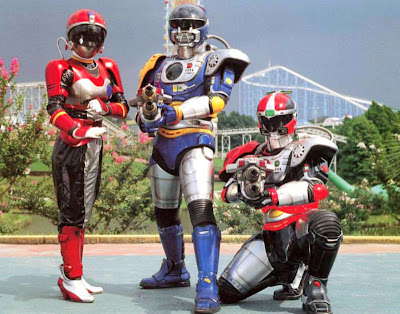 Super Rescue Solbrain (1991)
After Winspector police team leaves Japan to fight crime in France, Chief Shunsuke Masaki realizes he must create a new police team to defend Tokyo from the criminality menaces. He then creates Solbrain, a group of high-technology special rescue force, expert in missions that requires firepower and human life rescue. Their leader is Daiki Nishio, a rookie detective who is able to use the Plus Up command in his car to transform into SolBraver. Other members include Reiko Higuchi, who is also able to use Plus Up command to transform into SolJeanne, SolBraver's female counterpart, and SolDozer, a yellow dozer robot. 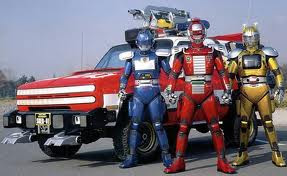 Tokusou Exceedraft (1992)
The last piece of the Rescue Heroes Trilogy. The human race to face the increasingly complex threats such as crime, pollution, natural disasters and sophisticated. The Police, Fire Department, Ministry of Defense, and Ministry of Health specialists have gathered from various fields such as special police Winspector and Solbrain. 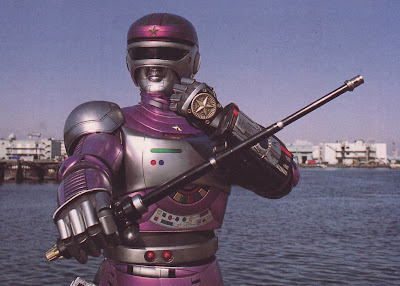 Special Investigation Robot Janperson (1993)
The series revolved around Janperson, a robotic detective who patrolled the streets of Tokyo and fought against three different underworld organizations who used super technology to subjugate the masses. Unlike most Metal Heroes, a monster-of-the-week was rarely shown and most of the villains are criminals akin to television police dramas. 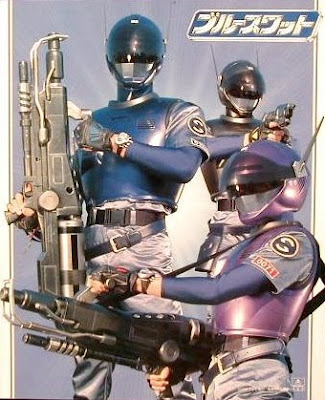 Blue Swat (1994)
I forgot about this, the suits weren't even full suits. Blue SWAT devitated from the Metal Hero aspects by using a realistic vibe for the series instead of fantastic, over-the-top action by focusing on the martial arts and gunplay. While the mood of the series appealed to the genre's adult fanbase and older viewers, the show wasn't well-received by children, which resulted in a change in to a lighter tone midway through the series. 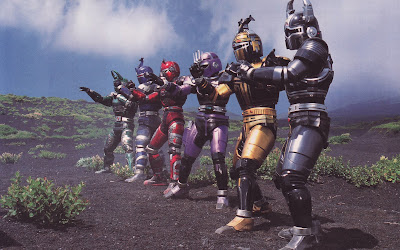 Juukou B-Fighter (1995)
Takuya Kai journeyed into the jungle and meets Guru who gives him and two others powers to fight the invading Jamhal. Footage was used for Big Bad Beetleborgs.

B-Fighter Kabuto (1996)
Sequel to B-Fighter, a new team of three rises up ten years later to fight the Melzard Tribe. They are later by four other multi-culture individuals. Footage was used for Beetleborg Metalix.

The last two were geared towards younger children. 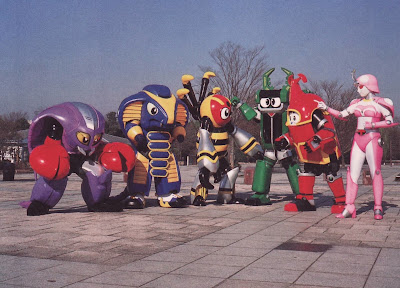 B-Robo Kabutack (1997)
It is the first of the kiddie shows made by Toei in the Metal Hero Series line. The program is a partial sequel to B-Fighter Kabuto, as the B-Fighters show up in the series. 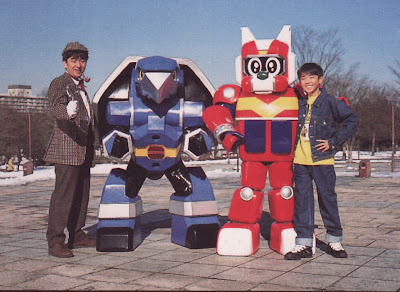 Tetsuwan Tantei Robotack (1998)
The series is the final installment of the Metal Hero Series and the partial sequel to B-Robo Kabutack. It aired after Seiju Sentai Gingaman on TV Asahi.
Posted by Lavender Ranger at 7:45 PM

I felt that Janperson is almost too similar to Robocop in some ways, even if he's fully mechanical in contrast to Robocop. Why? Well the show itself felt more like a prime time detective show than actual tokusatsu for children, which I liked about the show so I never knew that Janperson was part of Metal Hero until I learned that he appeared in B-Fighter in the special finale.